A blog about talking about things you don’t really know very much about.

At the end of October I was asked to keep Sue Dougan’s seat warm, presenting the lunchtime show from midday til 3pm, every day for a week while she was away. It made more of a change than I could ever have expected to chat during the ACTUAL DAYTIME, rather than my usual 5am Sunday morning slot (actually being awake, having actual listeners that aren’t just my mum and dad, having an actual producer…it was all so…actual), and although a frankly petrifying prospect, it was a challenge I was hugely flattered to have been offered. The show is a very female-focussed, conversation-driven show: think Woman’s Hour meets Loose Women, with a request hour in the middle called You Say We Play, and loads of brilliant guests.

For someone with an extremely diverse range of interests and for whom variety is most definitely the spice of life, the show was a dream to host, as the topics covered in the special guest interview slot at 12 and in the Chat Room discussion at 2 gave me an opportunity to talk about so much and, importantly, learn so much. This is key. There is no way on God’s earth any presenter of such a show could know everything about every current affairs news story, every entertainment news story, every film star, musician or talent-non-specified-celebrity, every piece of music from the last 40 years, every religious festival which your listeners might be celebrating, every piece of art, historical event or cultural mores and norms your guest might have been influenced by…the list goes on, because that’s the nature of ‘everything’. The most important piece of advice that Sue gave me before heading off to drink whiskey for a week with the in-laws (her words, not mine, and she tweeted that so it’s in the public domain, NOT a breach of privacy, I promise) was, ‘you can’t read the novels of every author you have on the show, you wouldn’t have time to do the show then. Don’t pretend to know everything your guest is talking about, don’t try to know everything they’re talking about. Just ask the questions your listeners will be asking.’ Good advice.

The only slight issue was that the average listener at that time is 56-years-old, and confronted with ‘the menopause’ and ‘the death of Lynda Bellingham’ as the topics for discussion in show one, my questions are obviously not quite aligned with those of the audience (hint: I’m not 56). This said, Sue also gave me some sterling tips for talking about things you don’t actually know anything about – not bullshitting, as such, more just knowing how to probe the right questions without giving anything away of where you stand on (or your understanding of) the subject. Obvs not giving those away, for fear that I ever end up interviewing anyone who has – for whatever unlikely/inexplicable reason – also read my blog, but needless to say, the brilliant advice allowed me to build on years of experience of those wonderful film junkets where you haven’t quite been able to make it to the press screening.

So a little summary of the topics covered and guests interviewed during that week run looks a bit like this:

Gabby Logan joined me to giggle about the Celebrity Great British Sewing Bee for Children In Need, hypnotherapist and author Pat Duckworth brought cool solutions for hot women going through the menopause, comedian and GQ’s Comedy Editor James Mullinger told me why a middle class feminist fell in love with Danny Dyer, things got heated at the Huntingdon Chilli Festival, I chaired a Black History Month special Chat Room with painter of the Black Heroes Portraits collection Tony Nero, poet Sonya King and Hannah Okorafor of the Cambridge Afro-Caribbean Society Curating Cambridge. Actress Victoria Brittain and Kettles Yard community officer Karen Thomas talked community collaboration on artistic projects, while ‘modern day Indiana Jones’ Alex Hirtzel was joined by fellow artist Robert Good to fill us in on the Art Language Location Festival. In fact, Cambridge was a veritable festival er… fest the week I was there, and we also welcomed representatives from Curating Cambridge, the Festival of Ideas and the Women Of the World Festival onto the show: video gaming guru and Guardian columnist Keza MacDonald and the Playful Being workshop ladies encouraged us to be more…well…playful beings. William Redaway came in to tell me about riding around the country on his horse Strider for charity, while I bonded with children’s writer JR Stringer over tales of trekking up Kilimanjaro for the British Heart Foundation. 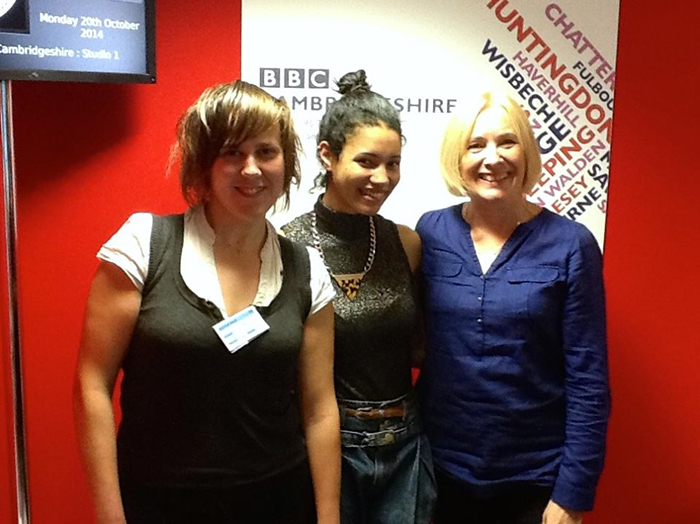 Receiving lots of lovely calls, texts and emails from listeners was my highlight (I don’t get a whole lotta interaction at 5am on a Sunday), and the icing on the cake had to be, in response to my welcoming listeners ‘on this cold Wednesday afternoon’, a text reading: “It’s not that cold.” Thanks mate.

The Black History Month themed show – in which we discussed whether the term ‘Music of Black Origin’ is at all relevant in a time when pretty much all modern pop music is derived from or influenced by rhythm and blues, funk, soul, house etc – preceded a nice little trip to the MOBO Awards. I was very lucky to be sitting on the ITV table, meaning we were brilliantly close for some excellent performances, had more food and drink than you could shake a stick at**** (including black water, which was taking the theme a bit far tbh) in prime position to spy on all the sweet ‘sleb activity and to fully enjoy Mel B’s ‘presenting skills’ in all their glory. I am pretty sure I saw her vagina. For such a fun night, I am a bit rubbish and only have these pictures of Tinie Tempah and Nicole Scherzinger looking nonchalant about presenting an award (and what), photobooth action with Plebs’ Tom Rosenthal and my VVV co-presenter Shyy (particularly funny were the guys in the booth before us taking pictures – some stony-faced, some with expressions of gratitude – with the toy MOBO award IN ALL SERIOUSNESS to look like they’d just won. Fellas, your friends WILL know you didn’t just win that. They have ways of finding out, and they’re no Sherlocks*****.) and this one of Tricked’s Ben Hanlin with a massive bottle of champagne. So there you go. 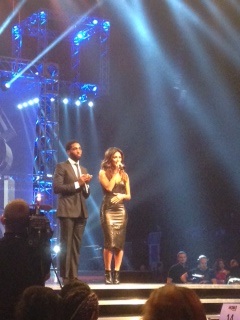 Delivering lines while concentrating on the road is quite the challenge, and squeezing cross-shooting cameras, a director and three presenters into a small car is an even bigger one. Sweet times. 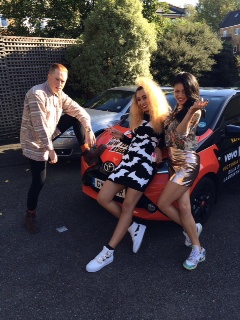 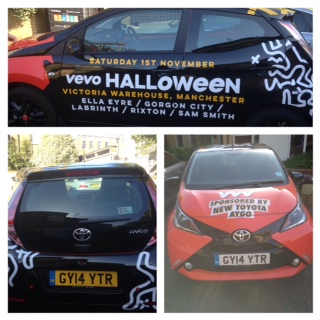 We presented the finished show to an audience of Vevo controllers and Toyota representatives at a little soiree at the end of the month, and a few hours later I hopped on a plane over to Amsterdam with a group of friends for 5 days of very very necessary R&R (slash debauchery, fine line, won’t go into it…went to the Van Gogh Museum and that is the main thing). I say necessary, this is because on my return at the beginning of November I plunged myself head-first into the pretty full-on madness that is having my own 4Music show. And on that not, I leave you, dear friends, with a To Be Continued…

*And, granted, many others.